Fire is a chemical reaction caused by combustion due to extreme heat. It is also a powerful and versatile implement against, by or with the supernatural.

Pyrokinesis is the power to manipulate and generate fire.

Exactly when fire came to use in the mortal world was not clear, although the Olympic pantheon led by Zeus had fire. This fire was stolen by Prometheus and was given to the humans. Zeus claimed this act by Prometheus led to the downfall of their pantheon, hence Zeus cursing the titan to die and be resurrected only for the titan to die again until the curse is lifted.

The Alpha Vampire stated that he was around when humans first gained fire, if this is the same time Prometheus gave fire to human's, it would mean the pagan deities, at least of the Greeks "lost" power thousands years ago.

Fire is used in many procedures, rituals and spells. The following are the common uses of fire in the supernatural world.

Fire, in conjunction with salt, is a known permanent deterrent for ghosts and similar beings when used on their bodily remains or earthly possessions.

Although normally resistant to conventional fire, demons could still be harmed depending on the use and intensity of fire. They are vulnerable to fire when their skeletal remains are exposed to it. This was considered to be a myth, until Bobby tried it successfully on a crossroad demon and it was later used to blackmail and kill Barthamus. Much like how a ghost or a vengeful spirit does, the demon burns and permanently ceases to exist. Unfortunately, their vessel burns to ashes as a result. This is also an effective means of torture as partially scorching a demon's bones hurts them. However, it requires knowing the demon's true name and the location of their bones and many demons due to centuries of torture have forgotten their original names or that they were once human at all. Ramiel, a Prince of Hell could be temporarily traped by Holy Fire, Jack was able to empower Castiel to burn the Prince of Hell Dagon to ash. Asmodeus, the last Prince of Hell was burned by Gabriel im a similar way to Dagon.

Angels are vunerable to Holy Fire, even archangels could be trapped with this, Josiah also was burned to death by holy fire. The archangel Michael could burn Anna alive with a touch, reducing her to ashes as she screamed.

Fire is also fatal to many creatures such as wendigos, changelings, rugarus, bisaans and unnamed creatures from another universe. In most cases, fire is also the only weapon that will work against such creatures. Thus, many hunters weaponize fire by using flare guns, flamethrowers, blowtorches and even simple lighters.

Regular humans are vunerable to fire due to their mortality.

Fire could also be used with Holy Oil to create Holy Fire. This is used against beings of angelic origin. It is rather versatile, as it could deter or even fatally harm angels, and it could temporarily banish powerful archangels.

Used in forming rings of holy oil, it could prevent angels from escaping. However, they could still access their powers and break free if they are resourceful and creative enough to create a gap within the flames. Holy flames could be used to create a molotov cocktail as an offensive weapon. Although primarily used against angels, Holy Fire could still hurt demons as shown when Sam drenches Abaddon in it and sets her on fire and when Castiel tosses Meg onto a ring of Holy Fire to escape it. It can kill demons, as seen in Soul Survivor, when a demon splashes Holy Oil on himself and lights it on fire in Crowley's court. It does take some time, though.

Another uses for Holy Fire is if an object is scorched with it, such as glasses, it allows a person looking through that object to see the normally invisible hellhounds, and cure a Rabid by exposure to Holy Fire.

Fire is also used by psychics in different rituals such as séances or by witches in performing their spells, such as a tracking spell. Many summoning rituals require not just a candle, but a lit matchstick thrown into a bowl of mixed magical ingredients as the final step. This is seen on rituals summoning demons like Azazel, or on rituals summoning angels, as seen when Balthazar was summoned by Sam Winchester. The witch-killing spell also required that a potion be lit of fire before being tossed at a witch.

Certain supernatural beings are also able to magically conjure and command fire, regardless of their alignment. Azazel of hell, Kali of the pagan deities, the phoenix of monsters and Michael of heaven are prime examples. This ability is called pyrokinesis. Powerful witches and magic practitioners are also able to conjure magical flames. One such example is Torvald, a Thule, using spontaneous combustion to assassinate an enemy. 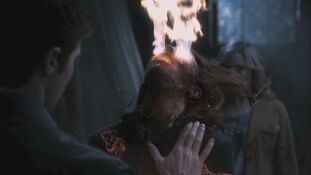 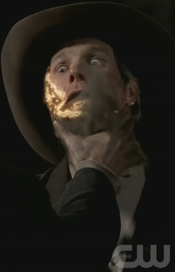 The Phoenix using its powers to turn opponents to ash. 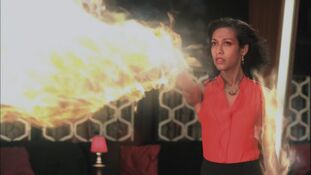 Kali unleashes a blast of fire. 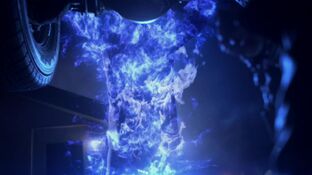 The Roman deity Vesta with her notable blue flames. 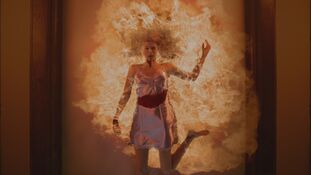 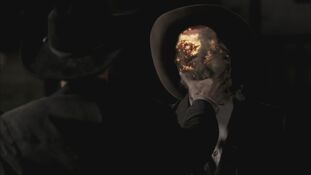