When Sam and Dean investigate the disappearance of a teacher, they are stunned to see the school is putting on a musical based on their lives. Familiar faces abound in this milestone episode.

A young girl sits on a couch on a stage when a prop ghost descends, Maggie and Siobhan enter the room playing Sam and Dean Winchester in the play Supernatural: The Musical. The director, Marie, yells cut and admonishes Siobhan for not wearing the Samulet. Siobhan doesn't like to wear it because it keeps hitting her in the lip. The teacher, Mrs. Chandler, is tired of the drama and decides to end the play. However, as she leaves the school she is attacked and disappears. Marie, who has decided the show must go on, is worried about the title card for the play.

Meanwhile, Dean polishes Baby and then tells Sam that he has found a case regarding a missing teacher. Sam, while skeptical (and worried), agrees to check it out.

The boys arrive at the all girls school and enter the auditorium as that was the last place the teacher was seen. Upon entering, the boys overhear someone saying "Idjits" over and over, and then see Kristen as "Castiel" say "Assbutt" and throws a fake Molotov cocktail. On stage, Siobhan as "Dean" sings "The Road So Far." The boys are flabbergasted. Marie approaches them, hoping they are from the publisher. Sam flashes his fake FBI badge, but then notices that "Sam" and "Dean" are doing the same thing on stage and stops Dean. Sam explains they are investigating the disappearance, but Dean interrupts saying there is no singing in Supernatural. Maeve firmly states that this is Marie's interpretation. Dean scoffs, if there is singing in Supernatural, it would be classic rock. Sam turns the conversation back to the case, and Dean goes to Mrs. Chandler's office with Marie while Sam gets a behind the scenes tour with Maeve.

Dean checks out the props for the play and then questions why "Sam" and "Dean" are standing so close. Marie says they are practicing the B.M. scene – the boy melodrama scene. Dean wants to know why they are standing so close together. "Reasons" responds Marie coyly. "You do know they're brothers?" Dean queries. He then demands they move apart.

Dean and Marie arrive in Mrs. Chandler's office, and Dean asks about the robot head. Marie says it is part of Act II and even though there is no space in Supernatural, Marie says her work is inspired by Carver Edlund's books. Dean calls it what it is: fan fiction. Marie says she wrote her own ending because she didn't like how things were left at the end of "Swan Song," but Dean, who claims to have access to the unpublished works, proceeds to tell her what really happened. Marie laughs at what she calls the worst fan fiction she has ever heard. Dean then sees Siobhan and Kristen, as "Dean" and "Castiel" hugging. Marie says they are a couple in real life, but they do explore Destiel in Act II.

As Sam and Dean leave the auditorium, Sam teases Dean with possible portmanteaus like "Destiel" and "Sastiel". Dean says "Shouldn't it be Destiel not Destiel?" Shortly after, they decide there isn't a case and leave the school. Later that evening, Maggie walks out of the play because she believes that if it isn't canon it should not be in the show, and she is going to go the principal about ending the play. As she leaves, she is attacked by the same monster that took Mrs. Chandler, only this time, Marie sees the monster.

Sam and Dean return to the school to investigate the new disappearance. Sam says they found the same flower at both scenes. Then, Marie tells them her story – that she saw a scarecrow take Maggie. Sam and Dean tell them the truth, and while Marie and Maeve don't believe they are the Winchesters, they are willing to accept that monsters are real. Marie then told them about her version of the scarecrow for the play, and they wonder if it is a Tulpa. They decide to burn the scarecrow in the hopes of ending the problem.

Marie and Dean head to the boiler room to take care of the scarecrow, and Sam and Maeve continue to research the flower that was found at the scene. After burning the scarecrow, Sam deduces that the monster of the week is Calliope, the Muse. Calliope wants the show to go on, and then she eats the author.

Upon hearing this, Marie panics and voices intentions to cancel the show, though is told it won't do any good. Dean also states the show must go on, to draw Calliope out. Even though Dean doesn't believe in this interpretation of Supernatural, he gives the frantic Marie a pep talk, and she agrees to move forward with the show. Since Maggie is missing, Marie will play Sam. Meanwhile, Sam has secured weapons, wooden stakes, to kill Calliope.

Marie, Dean, and Sam inspect the cast before the show begins, as Dean finds out that Dean's amulet is called the Samulet. Sam asks about Chuck, but Marie doesn't like including the author in the narrative. She hates the meta episodes, to which Sam and Dean agree. Dean reiterates that he doesn't agree with this version of the story, but he supports Marie's vision, and tells the cast to "kick it in the ass."

The show begins with "The Road So Far." The scarecrow appears and attacks Sam. Marie notices this before watching both disappear before Dean can reach them from the other side of the stage. Sam wakes to find himself locked in the basement with Mrs. Chandler and Maggie. Calliope appears and pins Sam to the wall. She tells Sam that this show was something special because the story's actual inspiration is here. Despite the second act with robots and tentacles, the show has everything: life, death, resurrection, redemption, but above all family, all set to music you can really tap your toe to.

Meanwhile, Marie asks Dean what now and he states the show goes on. "Castiel" sings "I'll Just Wait Here Then," as Dean and Marie wait for the scarecrow to reappear. This is followed with "A Single Man Tear." Half-way through the song, the scarecrow reappears in front of Marie. However, Dean attacks him and a fight ensues with the audience watching. As Dean fights the scarecrow on stage, Maggie hits Calliope which allows Sam to grab the wooden stake and stab Calliope. At the same time, after Dean is thrown by the scarecrow, Marie, as "Sam," grabs the wooden stake and stabs the scarecrow. Both Calliope and the scarecrow burst into purple goo. The audience gives a standing ovation as Marie and Siobahn take a bow. Intermission.

Backstage, Dean congratulates Marie on a job well done. He tells Marie to keep writing because he has his version of the story but she also has hers. As Dean turns to leave, Marie stops him (while hinting she now believes who he is) admonishes him for throwing away the Samulet, as Dean responds that he doesn't need a symbol to remind him how he feels about his brother. However, Dean takes the fake Samulet that Marie offers, and after an exchange of "Bitch Jerk," Dean joins Sam to watch the last act. A B.M. moment occurs as "Sam" and "Dean" drive off in the Impala proclaiming it is "the two of us against the world." Sam looks at Dean: "what she said." The cast, including Adam, sing "Carry On Wayward Son," as Sam and Dean look wistfully on.

The boys share a meaningful look as Dean hangs the fake Samulet on the rear view mirror, and then they drive off in the Impala. Meanwhile, back in the auditorium Maeve tells Marie that someone has claimed the ticket left for the publisher. An excited Marie approaches the man and asks what he thought of the show, the man is revealed to be Chuck who replies "not bad." 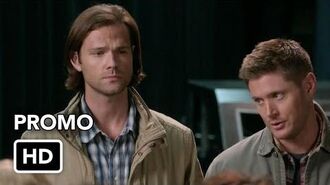