watch 02:03
Wiki Targeted (Entertainment)
Do you like this video?
Play Sound

Everybody Hates Hitler is the 13th episode of Season 8. It aired on February 6th, 2013.

Sam and Dean investigate the death of Rabbi Bass, who spontaneously combusted. The case becomes ever more confusing when they learn that the Rabbi was researching Nazi Necromancers. Sam and Dean are attacked by a Golem who turns out to belong to the Rabbi's grandson, Aaron. The key to the case lies with the Golem but Aaron doesn't know how to control him, which leaves everyone in danger.

<place lat="55.1833" lon="30.1667" width="300" height="200" zoom="8" caption="Vitsebsk, Belarus"></place> In 1944 Belarus, a gigantic humanoid figure attacks a Nazi stronghold, interrupting the group’s Commandant as he attempts to conduct some sort of blood ritual. His lieutenant encases a red ledger in a metal case, before the gigantic creature breaks into the chamber and kills all but the Commandant. The Commandant completes his ritual, disappearing into a goblet as a fire breaks out, destroying the building around the unharmed mammoth creature.

<place lat="39.8106" lon="-98.5561" width="300" height="200" zoom="8" caption="Lebanon, KS"></place> Meanwhile in present-day Lebanon, Kansas, Sam and Dean enter an abandoned facility with the key obtained from their grandfather Henry, finding the Men-of-Letters stronghold. Dean takes in the comfort of their new “Bat Cave,” enjoying the records and showers while Sam pours over the wealth of literature on the supernatural.

<place lat="41.2444" lon="-75.8781" width="300" height="200" zoom="8" caption="Wilkes-Barre, PA"></place> Meanwhile in Pennsylvania, an elderly man claiming to be followed searches a college library for a mysterious book, finally happening upon the red ledger we saw in 1944. Excited by the discovery, he phones an unseen figure to give instructions from a local bar, before turning to face a mysterious blonde man that no one else sees. Suddenly, the elderly man bursts into flames in view of the entire bar.

Weeks later, the brothers lament their lack of progress with Castiel and Kevin, as Sam uncovers old documents pertaining to a group of Rabbis expert on the supernatural called the Judah Initiative. Pointing to the last living member Rabbi Bass bursting into flames two weeks earlier, the brothers decide to take the case.

Back in Pennsylvania, Sam investigates Bass’ library records as Dean questions the local populace, noticing a mysterious young man following him. Dean confronts the man, who claims to have been admiring him romantically, while Sam observes someone following himself as well. The boys plot to meet up in a parking lot to confront Sam’s tail, but when Dean accosts the shadowy figure, it reveals itself as the behemoth from earlier! Sam and Dean foolishly attempt to subdue the creature, before Dean’s earlier admirer steps out and calls off the behemoth, identifying it as a Golem of Jewish legend.

Back at his home, the man introduces himself as Aaron Bass, the Rabbi’s grandson, who dismissed all his grandfather’s stories about the supernatural as legends until control of the Golem was bequeathed to him. The Golem berates him for abandoning his people’s purpose, cryptically urging him in Hebrew to “take charge.” Aaron explains that his grandfather had been investigating the Nazi necromancers of the Thule society, and left him a mysterious coded message before he died. Sam recognizes the code as library reference numbers, while the mysterious blonde watcher observes the four from outside.

Returning to the library, Sam finds the red ledger hidden on the library shelves, before the unseen blonde man shoots him in the neck with a dart, incapacitating him and inflicting a mysterious spell. Aaron gets hit with a dart as well, before Dean urges the Golem to defend his master against the mysterious man. Unaffected by the darts, the Golem soundly beats the blonde man, snapping his neck, and breaking the spells over Sam and Aaron. After burning and burying the man, Sam and Dean look over the ledger as the Golem explains that it pertains to cruel magical experiments performed by the Thule. He explains that Aaron would understand the situation better if he consulted the Golem's “owner’s manual” bequeathed by his grandfather years earlier, but the boy burned the book as rolling papers, not understanding its significance.

Meanwhile, the still-youthful Commandant pays a visit to the library, and finds evidence that the Golem attacked his man Torvald. Sam and Dean sift through the Golem legend looking for the best way to deactivate the creature, should it prove necessary, but the debate is interrupted by the arrival of the Commandant and his men. The Commandant deactivates the Golem, removing a scroll from his mouth, while holding the others at gunpoint. The men find the ledger, but Aaron gets the jump on the Commandant, and Sam and Dean quickly resume control of the situation, shooting two of the men. One of the men got away, but the Commandant was killed. After burying the dead men, Sam and Dean return to find the Golem still inactive, but Aaron vows to take up his Grandfather’s work with the Judah Initiative, reactivating the Golem as his protector.

Later, Sam and Dean continue their forebears work, utilizing the Men of Letters stronghold as their new home.

On the Sunny Side of the Street by Frankie Laine 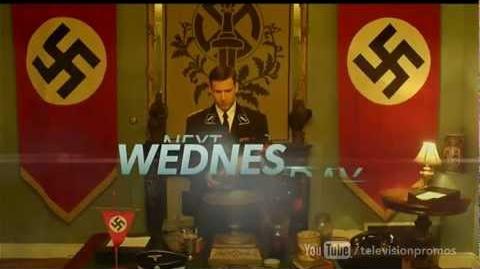