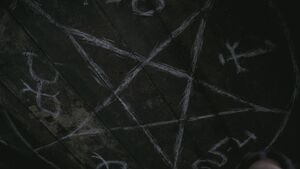 A devil's trap was a sigil trap for a demon. Like salt or iron, demons can't escape once inside the trap. They can easily walk into one, but can't get out unless the circle is broken, and they cannot use their powers nor break the circle directly while within it.

Hunters need a roof or floor to draw this trap to catch a demon. They can use, chalk, spray paint, marker, or blood (Caged Heat) to draw it . Even using it as a light can be effective (Weekend At Bobby's). A Devil's Trap can also be concealed and still catch a demon. Once down, this can be used to trap any sort of demon. In addition, it can be used to protect something.

In the episode Devil's Trap, Sam draws it on the trunk of the Impala to protect the Colt. Another situation is in All Hell Break Loose Pt.2, when Samuel Colt created a giant one to protect the Devil's Gate. This one was made out of pure iron railroad tracks, so a demon couldn't break it.

In the episode As Time Goes By, a Devil's Trap is used in a unique way: as they are unable to kill Abaddon, Henry Winchester carves a Devil's Trap into a bullet and shoots it into the demon's head. Having a Devil's Trap in her head severely limits Abaddon's movements like a normal Devil's Trap would and binds her to the body she is possessing. As a result, when her body is chopped up and encased in cement, Abaddon is trapped and can never leave as long as the head with the bullet in it is intact. After being put back together in Clip Show however, Abaddon is able to use her severed hands to remove the bullet and escape. Abaddon herself used this method to incapacitate Crowley during King of the Damned so he couldn't interfere in her final fight with the Winchesters.

As shown in Sacrifice, if a Devil's Trap is painted onto something attached to a demon, such as a pair of handcuffs, it will work as well as if they enter it.

Hunters draw traps on places that could easily be overlooked. Some examples include the ceiling, or underneath rugs. A veteran hunter like Bobby has a Devil's Trap in his living room near the fireplace (which is used to trap Meg). He also has one outside the panic room, and two more inside the panic room itself, one painted on the floor, and the other was soldered in the ventilation above the room. He also uses a trap on the door of his car trunk, to transport captured demons and preventing them from escaping. Linda Tran once used a Devil's Trap in a similar manner. To defeat Abaddon, Henry Winchester engraves a Devil's Trap onto a bullet and shoots it into her head. It acts as a normal Devil's Trap would with the added bonus of binding her to her vessel. Once, to capture Crowley, Dean painted a Devil's Trap on a handcuff and handcuffed the demon to himself. This worked as well as a normal Devil's Trap and Crowley was ensnared.

Despite the fact that it can trap most if not all demons, its greatest weakness is that it is simply a drawing. If the drawing is in any way broken or altered, the trap will lose its power.

And although able to trap demons and strip them of their powers, it does not take away their power to cast spells. This was demonstrated by Meg in Born Under a Bad Sign, when she used a spell to shake the house, thus breaking the trap that was binding her. Another demon named Casey was able to cast a spell from within, although she was unable to release herself.

Despite having one inside of her head, Abaddon was able to somehow control her severed hands to remove the bullet and thus the trap (presumably because they were no longer attached to her and thus not inside the trap).

During the Demon Curing Ritual, as the demon becomes more human, they become less and less susceptible to the trap to the point that they can eventually just walk right out without breaking it even before becoming fully human unless they are properly restrained.

Cain proved to be so powerful that while a devil's trap was able to confine him, he stated it wouldn't hold him long and still possessed his superhuman strength and telekinesis.

Ruby was also able to escape a Devil's Trap through some unknown method after Dean trapped her in one.

While a devil's trap bullet can bind a demon indefinitely, they can remove the bullet themselves and escape if they are not killed or further disabled afterwards.

Retrieved from "https://supernatural.fandom.com/wiki/Devil%27s_trap_(object)?oldid=172652"
Community content is available under CC-BY-SA unless otherwise noted.