In Missouri, a woman is skating before she bumps into a man carrying a cake. She falls, but the man catches her and they talk as a Cupid watches them pleased but Lucifer grabs him. Taking him somewhere hidden, Lucifer proceeds to extract the latter's grace. He threatens the cupid for information about other angels but the latter begs for mercy since there are few angels left. Lucifer tells the cupid he should be careful now that he's human before he kills him by impaling him with his hand.

Castiel returns to the bunker and talks with Sam and Dean who he tells of his imprisonment by Asmodeus who was mimicking him and using his phone to talk to them. When asked why he was captured, Castiel states it was because of the latter wanting Lucifer who he reveals to the surprised brothers has returned from the alternate reality. The brothers ask how he could have came back as Castiel reveals it was due to the other world's Kevin Tran using a spell to allow it. Castiel confirms they have an angel tablet which that world's Michael intends to use so he could invade their world which leaves the brothers shocked. He mentions Lucifer was afraid of Michael and wanted to help though brings up the latter's attempt to kill him after they escaped. The brothers decide to search for Lucifer who is weakened before asking about Mary and Castiel reveals she's alive but knows very little of her wellbeing.

Lucifer is walking through the streets and struggles in his powerless state as he experiences hunger and decides to ask for money after seeing a beggar do so.

Asmodeus is angry at Lucifer's escape as he tells a reprimanding Arthur Ketch that he had business to attend to. He decides to send the hitman to search for Lucifer and kill him in his weakened state. This task worries Ketch but he complies with the order.

Lucifer begs for money but is ignored by people who instead give money to the other beggar who has a bad leg and tells him they are put off by his asking before he offers to get him some food. The man takes him to a restaurant but eats from a dumpster since he is saving his money for his leg which will be fixed by a healer who Lucifer is skeptical until the man describes her work and tells him her name is Sister Jo. This intrigues Lucifer who makes plans to see her.

Dean has some sincere words over Castiel's capture as the latter says he promised Kelly Kline that he protect her son before they put their plan into action. Summoning Donatello Redfield, the group plan to have him read a spell on an angel tablet that could open a rift to the other world so they could locate their mother and Jack before Michael harms them.

While Donatello reads, they get word from Castiel about angels dying and realize Lucifer is responsible.

Lucifer goes to see the healer's acts for himself and sees many people with various conditions being healed and realizes her true identity. After the day is over, he confronts her and reveals he is aware she is an angel named Anael as she remarks on who he is but is not too impressed with it. Lucifer moves to steal her grace but she makes him a deal by routinely giving her time to refuel her grace after he takes some from her and promised to help him in his endeavors. Enticed by her offer after hearing her past, Lucifer agrees and soon takes a little of her grace before healing her wound. As he talks about the last angel whose grace he took, Anael realizes he was the one who the other angels spoke about and figures someone is coming for him.

The next day, the Winchesters and Castiel travel to Missouri and meet the same beggar Lucifer spoke to and he tells them where he went. At night, the Winchesters and Castiel go to Sister Jo's building but find Ketch instead and he says he was tracking Lucifer but proposes a team-up. Distrustful, Castiel knocks him out and they stuff him in the impala's trunk to question him and kill him.

Elsewhere, Donatello goes to a chicken restaurant and senses a presence and sees that its Castiel who tells him the boys sent him ahead to help. Donatello explains his progress with the angel tablet that they intend for him to read, so they can use a spell before anything happens which Castiel inquires if he means Michael but he states they intend to open a rift to get their mother and Jack out of the world before Michael harms them. Castiel freezes him and is revealed to be Asmodeus disguising himself as Castiel. He puts him under control and tells the prophet for information that's useful will be reported to him as he sends him on his way.

Meanwhile, in a motel Lucifer takes more of Anael's grace and the latter soon opens up to her but is confused as to why.

The Winchesters soon track Jo's card to the motel and meet her where Castiel reveals she is an angel and she points leads them to Lucifer. A confrontation breaks out as Dean tries to capture him but Anael helps the archangel who overpowers them and proceeds to torture them but Arthur Ketch arrives and throws a demon bomb but Lucifer whisks him and Anael away. He questioned why she helped as he states it was in her promise to do so.

The Winchesters question Ketch on his help as he explains he has to draw the line somewhere and again offer to help them. He reveals he is working for Asmodeus and can as a double agent for the Winchesters since he knew of Lucifer and the invading Michael's threat.

Elsewhere Lucifer meets with Duma and other angels, he propose they make him leader of Heaven but they refuse. However, Lucifer states he can help them create more angels as he watched God do it for eons and asks them to consider it. As a bonus, he also says he can give the angels their wings back.

At the bunker, Castiel asks if they can really trust Ketch but the Winchesters assure him that they would kill the man should try anything.

In Heaven, the angels have agreed to Lucifer's terms and have made him their new leader.

Ketch returns to Asmodeus and reports his failure, as the Princes of Hell is not too surprised as he agrees with Ketch's statement of Lucifer not being too weak. Asmodeus states he has too many problems which is Lucifer returning to full strength and the Winchesters possibly opening a rift to let Michael invade.

To have a contingency plan for both problems, Asmodeus reveals to Ketch that he had an Archangel Blade. Ketch mentions that the blade can only be used by archangels as Asmodeus reveals he has a disheveled but still living Gabriel in his possession. 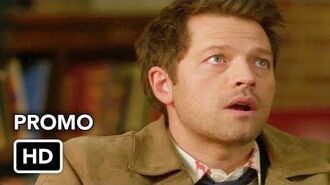 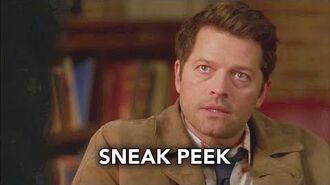 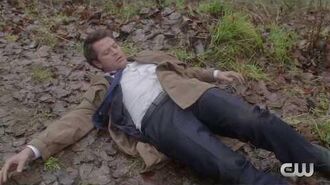