A search for the one thing that may give the Winchesters an edge against God leads Sam and Dean to Jo’s (guest star Danneel Ackles) door and to a secret that may have died with Ruby (guest star Genevieve Padalecki). Meanwhile, Castiel asks Jack to do the unthinkable to help the brothers in their quest.[1]

Sam goes through the lore while Dean checks the Internet for indication of Chuck destroying worlds. The brothers hear a rumbling noise and see a light beneath the armory door door. They look in and find a car inside, having come from a rift, and Alt-Sam and Alt-Dean get out. They fist-bump and then the rift flares and they and the car disappear along with the rift.

Later, Castiel arrives and the Winchesters tell him what happen. Billie comes in and says that Alt-Sam and Dean were running because Chuck is destroying their reality. Chuck is almost done and then it's their turn, so they need to prepare. Billie says that she has the next step for Jack. Jack comes in, eating, and says that he's ready and feeling good about it. She says that Jack needs to find the Occultum, but it's been missing for centuries. Billie explains that it's not a weapon, but powerful, and asks Jack if he's truly ready. When Jack says that he is, Billie tells the Winchesters that they have to be careful so Chuck doesn't learn what they're doing.

Later, Sam and Dean look through the lore trying to find any mention of the Occultum. Dean finally wonders if Jack kills Amara as well as Chuck. If they kill Chuck, then the world is out of balance so Amara needs to die as well to keep a balance. Jack comes in blowing a bubble gum bubble and says that he just learned how to do it, and the Winchesters figure that he's not ready to take over. Sam and Dean ask how he plans to take on Chuck, and Jack is vague on the details.

Castiel comes in, finishing a call with Sergei, and says that the Occultum is divine and was owned by the Jacobson family until a few years ago. A faith healer saved one of their children and demanded the Occultum in payment, and the description matches Jo.The Winchesters track Jo down where she's doing faith healing. When Dean mentions the Jacobsons, Jo refuses to discuss it and the brothers say that they need the Occultum to kill Chuck. Dean says that Chuck is back and going to murder the world unless they stop him. Jo refuses to make God her enemy, and the brothers draw their angel-killing daggers. The angel quickly says that she gave the Occultum to Ruby.

Near Topeka, Jo is running her healing show when Ruby confronts her. Ruby figures that Jo has been holding out on her, and offers to provide a buyer for the Occultum in return for a "taste" of it, and they can make millions.

Jo says that Ruby took the Occultum and hid it in Hell, and then the Winchesters killed her.

In the bunker, Jack is eating as much takeout as he can when Castiel comes in. Jack talks about coming back from dead and getting into life, but admits that he doesn't feel things the way he did when he had a soul. He talks about how he understands joy or sadness, but knows they aren't in him. Castiel reminds Jack that he killed Mary, and Jack admits that he caused the Winchesters pain and things have changed. He wonders if Dean will ever forgive him, and Castiel says that Dean might work through his anger. However, Castiel doesn't know how long it will take.

Sam and Dean return and Sam says that he can use Rowena's notes to wing it. He takes them to the armory and reveals ghostly images of Alt-Sam and Dean, who can't see them. Castiel figures that the blast trapped them between dimensions when Chuck destroyed their world and the rift. Dean tells Sam that they'll handle it eventually, but right now they have to go to Hell. Castiel points out that Sam was sexually intimate with Ruby, and figures they can call on Ruby to help them locate the Occultum in Hell. Dean figures there's nothing that Castiel can do and tells him to stay put.

Sam transports himself and Dean to Hell, and a demon finds them and says that they shouldn't be there. The demon says that Rowena is hosting a reception for newly condemned souls, and he takes the brothers to her.

Castiel tells Jack that the Winchesters made it to Hell. However, the angel points out all the holes in Jo's story so they need to talk to Ruby. Castiel asks Jack to almost kill him so he can put one foot in the Empty and talk to Ruby. He wants Jack to store most of his essence in an enchanted flask, watch over it, and then bring him back. Jack wonders what happens if he screws up, and Castiel figures that he'll do fine. He also tells Jack to watch over the spell bowl so Sam and Dean can come back. The angel tells Jack to give him one hour and then bring him back, and Jack draws Castiel's grace into the flask.

The guide demon leads Sam and Dean, who realize too late that it was a trap. Two more demons come at them, and the Winchesters fight the three demons. Dean manage to kill the two newcomers, while Sam grabs their guide. The guide says that Jo told them that if they helped her, she'd get them out of Hell. Sam kills the guide, and Dean figures that Jo set them up.

Jo is wrapping up her show when a man comes in and asks if she can help him. She says that she isn't Jo, advises him not to make friends, and leaves.

Castiel arrives in the Empty and calls to Ruby. Meg finally appears and greets him, and Castiel realizes that The Shadow has taken on the appearance of Meg. Castiel explains why he's there and knows that the Empty is working with Billie, and the Empty points out a glowing red ball. It forms into Ruby, who wonders where she is. Castiel tells her that she's dead and he almost is, and explains that he's looking for Occultum. Ruby reminisces briefly about Sam, and explains what really happened.

Jo calls in Ruby and offers her a deal: there's going to be a deal between Lucifer and Michael, and nothing will be left standing if they fight. She suggests that since they work together, they work well together. They can make a new world order afterward, if they ride it out the apocalypse in the Occultum.

Ruby says that she can lead Castiel to the Occultum, and Jo doesn't know where it is. However, Ruby will only help Castiel if he gets her out of the Empty.

Sam and Dean return from Hell and wonder where Castiel is.

Ruby says that the Empty is filled with the regrets of Angels. She wants Castiel to try, and he agrees.

Jack tells the Winchesters where Castiel is, and the brothers tell him to bring Castiel back.

Ruby whispers to Castiel where the Occultum is and disappears. The Shadow stops Castiel and says that she can make him wish he's dead, and telekinetically tortures him.

The Shadow says that she's on Death's side, and when Billie's plan works the Empty can go back to sleep. Billie didn't say anything about needing Castiel, and he can't just come and go in the Empty.

Castiel wakes up in the real world, and Dean points out that he's an idiot. The angel says that the Occultum is a place, not a thing, and Ruby gave him the location. Jack wonders what happens if Chuck checks on them, and Dean says that he has a dumb idea. He leads the others to the armory and figures that Chuck needs to see them... so they'll get their counterparts out of the in-between they're caught in.

Using some of Castiel's grace, Sam casts a spell to open a rift to free their counterparts. Alt-Sam and Dean appear, and soon they all gather in the kitchen for beers. The counterparts explains on their world John is still around but they got separated when they came through the rift. Dean says that they do fine hunting monsters all over the country, and Alt-Dean explains that they do it worldwide and have their own plane. They get paid for hunting monsters, and Alt-Sam says that HunterCorp does well after John built it up from scratch.

Later, Sam, Dean, Castiel, and Jack go to a church. Jack figures that it's too easy, and they hear growling in the nearby woods. Dean picks the lock on the church door while Sam realizes that hellhounds are after them. The group gets into the church just in time and slams the door shut behind them. As the Hellhounds pound on the door, Castiel says that Ruby told him that the top of the cross would point the way.

As Sam holds the door shut, the moonlight shines through a window and reflects on the cross. The reflection forms on the floor, and Dean opens the board there to reveal a small silver sphere. It has Enochian on it, saying that the Occultum must be in them.

Dean figures that the sphere is another trap, and Jack eats the sphere to have it in front of him. He moans clutches at his stomach in pain and glows, and then disappears. Jack finds himself laying in a forest. A girl steps out and figures that Jack is an angel because humans can't enter there. The girl says that it's Eden, and God loved Adam and Eve until Chuck banished everyone from there. When Jack says that he was told the place might change him, the girl says that he'll know soon enough if he was meant to find it and disappears.

Castiel tells Dean that he had no idea what would happen.

A snake lowers itself from a tree and asks Jack who he's meant to be. Jack falls to his knees and remembers all of his time on Earth. He also remembers Lucifer telling him that the others will never trust him again and falls on his back.

In the church, a glowing sphere floats out of the ceiling and then approaches Dean and Castiel. The hellhounds break in, and the sphere glows, disintegrating the hellhounds. The sphere disappears, leaving Jack behind. When Jack wakes up, he just stares at the others.

Back at the bunker, Dean thanks Alt-Sam and Dean for their help. The Alt-Winchesters suggests that they live there together in the bunch, but Dean tell them that it would be weird and they're best off in Brazil. As the Alt-Winchesters go, they say that they drove the Impala and Dean isn't happy.

Sam is standing watch outside the kitchen. When Dean arrives, Sam admits that he doesn't know if Jack is okay. Castiel comes out and says that Jack isn't himself or his soulless version, and no one has been to Eden since Creation. The trio go in and find Jack in tears. He apologizes and says that he should have understood because his mother died as well. Castiel tell the Winchesters that Jack's soul is back, and he begs the Winchesters to forgive him for killing Mary. The brothers can only stare at Jack, shocked.

Jack in the Garden of Eden 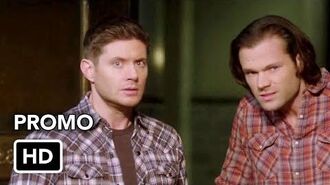