With the plan in full motion, Sam, Dean, Castiel and Jack fight for the good of the common goal.

Sam, Dean, and Castiel take Jack to the bunker control room, and Jack says that they have to get him outside so he can blow up as far away from them as possible. Jack insists that he doesn't want to hurt them, and Dean asks Sam if he can use one of Rowena's spells to stop Jack from self-destructing.

Billie arrives, holding a scythe, and says that they've done enough. She points out that they were so close, and the Winchesters tell her that Chuck set the whole thing up. Castiel begs Billie to stop Jack's self-destruction, and she says that she can't stop it but there is something she can do. Stepping forward, Billie teleports Jack into the Empty. The Shadow is there, in Meg's form, and Jack blows up.

Billie tells the trio where she sent Jack. She explains that the Empty was the only place that could absorb Jack's detonation, and tells them that it's done. Castiel wonders if Jack is dead, and Billie tells them that Jack might be. The Empty is vast enough to hold the explosion, but the Shadow will be pissed if it survives. Billie says that the Shadow has "beef" with Billie, but it can't come to Earth without being summons. The reaper says that she won't bring Jack back until Sam returns God's Book.

Sam figures that Billie was always going to betray them, and Billie was going to kill everyone that came from another world, and everyone that had been resurrected, including Sam and Dean. He wonders what would stop Billie from killing them all of he gives her the book, and Billie says that he doesn't have a choice. Jack won't last long and if they want Jack back, Sam needed to give her the Book immediately.

Jack finds himself unharmed in the Empty. The Shadow reforms in front of him, and is furious with Jack for blowing up.

Sam gets the Book and tosses it on the table in front of Billie. He joins Dean and Castiel, and Billie takes the Book and says that it has a new ending.

The Shadow pulls Jack to her and complains that he made it loud.

Jack disappears from the Shadow's grasp and reappears in the bunker. Billie says that Jack is still useful and that he still belongs to her. Billie attempts to take Jack with her. Dean grabs her scythe and slashes her with it, and then Billie telekinetically knocks him back. She clutches at her wounded arm and teleports away without Jack. Jack collapses, and Sam picks up the Book but can't open it.

Later, Dean is drinking in the main room when Sam joins him. Sam admits that he couldn't sleep either and pulls up a chair, and the two brothers drink. Dean apologizes about what happened between them earlier, and says that he couldn't stop when they were so close to beating Chuck. Sam says that Dean has snapped him out of worse, and Dean figures that Chuck is probably more powerful than ever, Billie wants them dead, Jack is powerless, and Michael isn't returning their prayers. Sam figures that they'll regroup, but Dean isn't convinced.

Stevie is making eggs for Charlie, and Charlie finally puts away the gun that she's working on and takes the eggs. Charlie wants to go on a "date" hunting down some shifters, and digs into the eggs. Stevie suddenly disappears, her plate falling to the floor. Charlie calls her lover's name but gets no answer, and she calls in the Winchesters.

Charlie explains that Bobby sent Charlie to Stevie to back her up on a Djinn case, and they ended up together. She wonders why Stevie disappeared and not her, and Dean admits that they don't know why. Charlie says that she didn't see or smell anything, and realizes that the Winchesters know something.

Castiel and Jack are outside, and Castiel asks Jack how he's feeling. Jack says that he feels strange, but doesn't know why. He wonders if it feels strange because his destiny was to die and he didn't. Now Jack doesn't know why he's there, and Castiel tells him that he never needed absolution from any of them. The angel says that they care about Jack because he's him, not because he fits into some grand design.

Jack points out that he doesn't have his powers, and there's nothing he can do to protect them. He admits that he's scared, and Castiel admits that he is as well and puts a comforting hand on Jack's shoulder.

The Winchesters tell Charlie that Death wants to send everyone from other worlds back, to worlds that don't exist. They figure Stevie fits a pattern, and Charlie is angry that she let her guard down and loved Stevie, and now she's gone. She wonders if she and Charlie are collateral damage to them, and they have no answer.

Bobby calls Sam, then hangs up and says that Bobby was on a hunt with another Apocalypse World refugee Hunter, and he disappeared. Dean figures that everyone who has ever resurrected is on Billie's list, and Sam figures Eileen is a target.

The quartet drive to Eileen's, and Sam texts Eileen. He finally gets a response but then she cuts out in the middle of their texting. They get to Eileen's house and find Eileen's phone on the front lawn. cut off midway through a text to Sam. Sam refuses to give into his grief, then tells the others that they have to get a location central to everyone, gather them there, and put up every warding they can. Dean says that he started it so he'll end it, and he'll use Billie's scythe to kill her. Castiel goes with him, and Dean agrees. The brothers hug and Dean leaves with Castiel.

Sam stops at a gas station, calls Donna, who has found a place where all the survivors can gather. She wonders what the plan is, and Sam tells her that he's still planning on it while looking at Jack. Once Sam hangs up, he asks Jack to drive while he looks through the lore. Jack agrees and hesitantly starts the car and drives off.

Dean and Castiel return to the bunker and Dean grabs the scythe and says that they'll burn her books and wreck the place to smoke Billie out.

Jack and Sam arrive at the silo that Donna is using as a base. Donna greets them and as Jack goes in to set up the warding, Donna hugs Sam and offers her condolences on Eileen. She says that she has calls out to the other Hunters and they're all on high alert. As Donna goes inside, Charlie pulls up in a truck and tells Sam that she doesn't want what happened to Stevie to happen to anyone else.

Inside, Bobby and the other Apocalypse World Hunters have arrived. Sam comes in and Bobby tells Sam that he's the "big man" there. He wonders if the warding will work, and Sam has one of Rowena's spells that should boost the warding. He admits that it's all that he's got.

Donna finds Jack studying a break in the warding caused by a growing plant, and suggests that they patch it up. Once she leaves, Jack gestures at it and it dies, and realizes that his powers are coming back.

Dean and Castiel enter Billie's library, split up, and they find Billie waiting for them. Dean says that he wasn't trying to kill her the last time, and Dean points out that now she's killing all of her friends. he braces himself to attack, and Billie telekinetically knocks him back and then chokes Castiel. Dean grabs the scythe and cuts Billie in the arm. She manages to block the next blow, and Dean tells her to call it off. Billie says that she didn't hurt his friends, and he's in the wrong place.

Sam casts the spell to power the wardings. They glow with extra energy, and he says that now they're waiting.

Billie figures that Chuck is wiping out the alternate world refugees.

One refugee, Lily, disappears, and Sam realizes that the warding isn't working. The other refugees disappear, including Charlie and Bobby. Sam, Donna, and Jack are left alone. and after a moment Donna calls out to Sam terrified and disappears as well. Lastly, Bobby with a shocked look turns to Sam and vanishes.

Billie tells Dean that when he cut her earlier, she can't survive. She tells Dean that he killed her so she doesn't care about his friends or family. However, Billie says that she has one wish before she goes: she wants to see Dean dead. She disarms Dean and telekinetically blasts him and Castiel back. Dean and Castiel run into the stacks and go back to the bunker.

Sam and Jack look around the otherwise empty silo.

In the bunker, Dean tries to come up with an idea to stop Billie. He clutches at his chest in pain as Billie, up on the stairs, squeezes a fist. As Castiel leads Dean into hiding, Billie says that Dean is human disorder incarnate and she's always sought to destroy him.

Castiel takes Dean downstairs and Billie follows them. She asks if Dean finally agrees that it's time for the sweet release of Death. Castiel takes Dean into a storage room and makes a ward with his own blood to keep Billie out. She arrives at the door outside but can't enter, and the ward blocks her grip on Dean's heart.

Billie pounds on the warded door, and Dean figures that they can't wait her out. He figures that they just led themselves into another trap, because he couldn't hurt Chuck. Dean blames himself for not knowing how to do anything but kill, and figures they should be with Sam and Jack. He figures everyone is going to die and he can't stop it, and Billie will get through the door soon and kill first Castiel and then Dean.

Dean apologizes to Castiel, and Castiel has an idea of one thing that is strong enough to stop Billie. When Jack was dying, Castiel made a deal with the Shadow to save him. The price was Castiel's life: When he experienced a moment of true happiness the Shadow would come to take him. Castiel has never been able to figure out what would make him experience a moment of true happiness, because the one thing he wants is something he can't have. Now Castiel knows that happiness isn't in the having, but in just being and saying it.

A portal to the Empty appears, and Billie breaks in. Castiel tells Dean goodbye and shoves him aside, and a black tendril reaches out from the portal and pulls Billie, and a smiling tearful Castiel into the Empty, leaving Dean alone in the Bunker.

Sam and Jack leave the silo, and Sam tries to call Dean but gets no answer. Jack wonders if was just refugees. Sam admits that he doesn't know. Across the world, everyone is gone.

Dean sits in the bunker and realizes that he's getting a call from Sam. He ignores it and drops the phone, sobbing.[1] 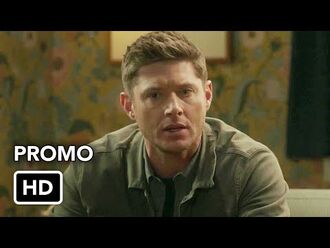