Supernatural Wiki
Register
Don't have an account?
Sign In
in: Non-Canon, Supernatural: The Anime Series characters, Humans,
and 4 more

Edit
watch 01:23
Wiki Targeted (Entertainment)
Do you like this video?
Play Sound

Dean Winchester (ディーン・ウィンチェスター) is one of the two protagonists of Supernatural: The Anime Series, a Japanese remake from the first two seasons of the original TV Series. He is the elder son of John and Mary. Dean hunts demons, spirits and other supernatural creatures with his brother, Sam Winchester. 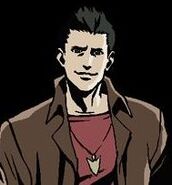