Edit
watch 01:40
The Sandman Will Keep You Awake - The Loop
Do you like this video?
Play Sound

Cursed Objects are objects imbued with black magic, that cause bad luck and misfortune, and in the most extreme case, can cause death. According to Sam, with enough black magic, anything could be made deadly. Although most objects are limited to certain events, some are very powerful and extremely dangerous to the handler. Many objects possess forms of mind control.

The objects can only be held in special boxes, marked with special runes, which kept its dark magic trapped inside.

In Plush, a bunny head mask that caused a young man to commit murder was believed to be a cursed object but was in fact possessed by a ghost and used to get revenge. 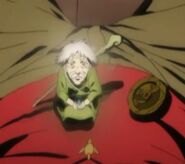