Out of the Darkness, Into the Fire

Dean makes a shocking decision regarding the Mark of Cain that would change not only his life, but Sam's too. Meanwhile, Crowley and Rowena (guest star Ruth Connell) face off and Castiel gets caught in the middle.

Sam and Castiel have lost track of Dean who doesn't want to be found. Castiel worries about the consequences of having Rowena remove the Mark of Cain using the Book of the Damned, but Sam points out that they don't know what those consequences are and there's no alternative. Meanwhile, Dean wakes up on a motel room floor, worse for wear telling himself he is okay.

Dean in his Fed suit investigates the murder of Rose McKinley. He shocks the local sheriff with his cold demeanor when talking about the victim. Rudy, a hunter acquaintance, turns up at the murder scene as another Fed. Dean tells him to walk away and let the real hunters do the work. The sheriff tells them both that Crystal Thorrson was with Rose when she disappeared, and Crystal is still missing.

Sam and Castiel visit Rowena to threaten her with death to do the spell to remove the Mark of Cain. Rowena stands defiant, knowing she is the only one that can perform the spell, and only agrees to perform under the condition that she gains her freedom and as well as Nadia's Codex.

Dean talks to the parents of Rose McKinley in their home. He tells them that Rose was wearing a skank outfit and looking for sex because her home was pervaded by "deceit and beatings and shame." Joe McKinley punches Dean, who pulls his gun on him, but he gets no answers. Rose's brother, J.J., intercepts Dean outside the house and tells him Rose and Crystal used to hang out with some guys in a cabin out by Cross Creek.

Rowena tells Sam and Castiel about the three ingredients for the spell: the forbidden fruit, the golden calf, and a sacrifice of something that the spellcaster loves. Rowena says there's nothing she loves, not even Crowley. Castiel doesn't believe her, saying "Everyone loves something," he touches her forehead and looks into her mind. He sees Oskar, a boy Rowena befriended 300 years earlier. Sam gets a phone call from Rudy, who tells him where Dean is and that "he's not playing well with others." Sam leaves, asking Castiel to make sure the spell happens.

Dean surprises a vampire outside the cabin, and promptly removes its head. Inside he finds Crystal, tied up but alive, and a vampire named Reggie threatening to kill Rudy. Dean tells Rudy to man up and walk away, telling him Reggie won't kill him. As Rudy tries desperately to diffuse the situation Dean continues to taunt Reggie and spooks him into killing Rudy. Once Rudy hits the floor, Dean rushes and kills Reggie, freeing Crystal as he exits the cabin. Back at the motel Dean sees Castiel's bloody face in the bathroom mirror, then a sneering Rudy, which leads to him punching the mirror and trashing the motel room.

At a crossroads, Castiel summons Crowley to get him to collect the ingredients for Rowena's spell. Crowley refuses, even as Castiel threatens to smite him he stands defiant, however he tells Castiel that he will help under one condition: Castiel begs and calls him King, only then will he agree to gather the ingredients.

Sam arrives at the cabin and finds out what happened, then he finds Dean's motel room, Impala parked outside. Dean is gone, but he left his car keys and a note saying "She's all yours."

Dean summons Death, offers him homemade Mexican food, and asks Death to kill him because he can't fight the Mark. Death says he won't kill Dean, as it is impossible even for him. Death tells Dean that before God there was the Darkness, a horribly destructive, amoral force that was beaten back by God and his archangels and locked away. God created the Mark to serve as both lock and key for the Darkness, and entrusted it to Lucifer. But the Mark was a curse and corrupted Lucifer, leading to his fall. God banished Lucifer to Hell, and Lucifer passed the Mark to Cain. Death says he will only remove the Mark if Dean shares it with someone else, so the Darkness remains locked away. Dean refuses, so Death offers to relocate Dean with the Mark far away from Earth where he will no longer be a danger. Dean calls Sam and tells him he's done, and to come to him so he can say his goodbyes.

Sam arrives at the bar to find Dean and, to his surprise, Death. Sam tells Dean "You don't need to die!" Dean replies it's not his death that is the way out – it's Sam's. Death tells Sam he believes Sam will never rest until Dean is free of the Mark, and so he has to die for the greater good. Dean tells Sam that the world would be better without them in it, that they're followed by evil. Sam objects that they're not evil. Dean says he let Rudy die and Sam drove a man to sell his soul and bullied Charlie into getting herself killed. Sam argues that Dean is not an evil man, he's a good man trying to find a solution by summoning Death and calling Sam. But Dean won't budge. Sam punches him and they have a vicious fist fight which ends with Sam on the floor. Sam tells Dean that he, the real Dean, is nothing but good – but he's right. Dean has to be stopped at all costs before he hurts anyone else. Looking up at Dean from where he's kneeling on the floor, Sam says "Do it." Death hands his scythe to Dean. Sam shows Dean a couple of pictures that he brought – of Mary Winchester, Sam and Dean as children – as a guide to remind Dean, some day, what it was to be good and what it was like to love. Dean asks Sam to forgive him, then swings the scythe over his head and stabs Death, who crumbles into dust as Dean looks on in shock.

Crowley brings the spell ingredients and Oskar to Castiel and Rowena. Rowena, showing unusual emotion, hugs Oskar and then stabs him in the neck with a pen. She collects his blood and completes the spell. Lightning strikes Dean's arm and removes the Mark of Cain. Rowena, now free of her iron chains, immobilizes Castiel and Crowley, puts her signature attack dog spell on Castiel, and leaves with the Book of the Damned and the codex. Castiel, bleeding from the eyes, attacks Crowley with his angel blade.

As Sam and Dean leave the restaurant, lightning strikes the ground in multiple places throughout the nearby field. In each place, black, roiling smoke erupts from holes in the earth and forms a cloud that grows to obliterate the sky. Sam and Dean get into the Impala and try to drive away, but hit a pothole. The car and everything around them are engulfed by the cloud of smoke. 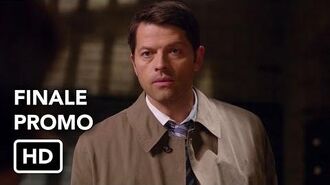