Brock was born on August 17th, 1985 in New Orleans, Louisiana. He has a slim body build. His hair is dark brown, and his eyes color is hazel.

Brock's first onscreen appearance was in the TV movie "Costume Party Capers: The Incredibles" in 2004. He landed a recurring role as Josh in 11 episodes of "Days of Our Lives" from 2005 to 2006, made his appearance as a younger version of Dean Winchester in the season 4 episode After School Special, alongside Colin Ford as a young Sam Winchester, in 2009 and starred as Zack Springer in 6 episodes of the Ravenswood TV series in 2013 and 2014. He also appeared in cinema movies such as Faded Memories (2008), Costa Rican Summer (2010), and Pitch Perfect (2012).

Brock also worked as a model for LA Models.

Even if Brock Kelly starred in a single episode only, he was present on various Supernatural Conventions such as Salute To Supernatural or at Supernatural panels held at other conventions. 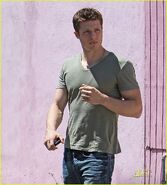 Retrieved from "https://supernatural.fandom.com/wiki/Brock_Kelly?oldid=313316"
Community content is available under CC-BY-SA unless otherwise noted.