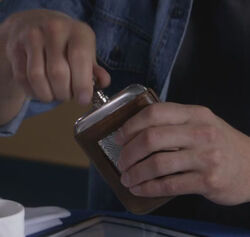 This flask once belonged to Bobby Singer, but came into Dean's hands following Bobby's death. The flask was regarded as a precious object to Dean during his time with it.

After Bobby's death, Dean decided to keep Bobby's flask to remember him. It made its first appearance in Adventures in Babysitting where Dean is keeping it in his bag. It made a later appearance in The Slice Girls where Sam notices Dean drinking from the flask. Sam attempts to talk to Dean about it, but Dean tells Sam he's honoring Bobby's memory with it. Later on, Dean accidentally leaves the flask at Lydia's and goes back for it. Dean tells her the flask means a lot to him.[1]

In order to investigate a haunted house on his own, Bobby removes the flask from Dean's coat pocket so he can look around the Van Ness house. The flask goes back into Dean's possession once Dean returns to the house, only to find a ghost Bobby. A bit upset, Dean puts the flask in the back of the car.[2]

When Sam and Dean recruit a hacker named Charlie for help, Bobby puts the flask in her bag. Charlie finds the flask and calls it a good luck charm while drinking from it. Dean tells her not to lose it due to it being a family heirloom. After the job is done, Dean gets the flask back.[3]

Dean locks it in a safe, because he and Sam fear that the more violence Bobby takes part in, the closer to a vengeful spirit he becomes. However, Bobby possesses a housekeeper and cracks the code to the safe, taking the flask with him as he leaves, still in the woman's body.[4]

Sam and Dean burn Bobby's flask on Bobby's request, after he realizes how dangerous he is. As Bobby's flask melts, Bobby's ghost is finally laid to rest.[5]

During the flashbacks of Safe House, Bobby can be seen drinking from the flask.

Retrieved from "https://supernatural.fandom.com/wiki/Bobby%27s_Flask?oldid=409339"
Community content is available under CC-BY-SA unless otherwise noted.