Sam and Dean investigate the mysterious death of a girl and the disappearance of another.

The Bunker is flooded in red light as a battle rages out of sight. A man flies into the wall of the corridor, followed by a battered, bruised, and bearded Dean Winchester. Barely risen from the ground, the man is attacked by Dean, who defeats both the man and any other enemies who dare to come close. The flaring light in their eyes as they die reveals the fight to be against an onslaught of demons.

Passing a comrade, Dean quickly gives him silent orders, then continues to make his way through more demons to the Bunker kitchen, which is scattered with bodies. Dean spots a survivor leaning against a counter; he is revealed to be a fatally-injured Benny, wearing fatigues. Benny passes swiftly, and a grief-stricken Dean demands "Where is he?" from a nearby demon who warns that the "He" in question is closer than Dean thinks. After dispatching said demon, Dean heads into the Bunker war room, where he is greeted by a formidable Sam. Sam taunts Dean about how he knew he would hunt him once he found out what Sam had done in Sioux Falls to Bobby and Jody. Despite these vile acts, Dean tries to appeal to Sammy, suggesting it is just the demon blood making him act in such a way, but Sam's only response is his eyes flooding black before he snaps Dean's neck using telekinesis.

Sam gasps awake in his bedroom, confused and scared by what he has dreamed.

Dean is eating bacon when Sam enters the Bunker kitchen. He offers some to Sam, claiming it is the veggie bacon that Sam has been asking for. When Sam refuses, saying he's good, Dean calls him on his BS and says he gets why he's not great after everything that happened with Jack and Rowena. He reminds him that Rowena made her choice. Trying to distract Sam from his grief, Dean shows him a case in Beaverdale, Iowa, where a cheerleader was found mauled to death after a string of cattle mutilations. Sam tries to fob Dean off with the idea of Dean working solo or with the assistance of other hunters, but Dean stands firm. He tells Sam they need this before clapping him on the shoulder, causing Sam to wince, unnoticed by Dean who has already walked out of the room. Sam eats a strip of the veggie bacon before spitting it out angrily and shouting at Dean that it is real bacon to which Dean replies, "You're damn right it is!"

In Beaverdale, Iowa, Sam is in his FBI suit interviewing Vice Principal Bailey of Beaverdale High School about the victim, Susie Martin. They are interrupted by Mr. and Mrs. Whitman requesting that the memorial for Susie be relegated to a mid-match prayer so that the Lacrosse game on Friday is not postponed. When Sam presses them about their attitude, they argue that a scout from Yale is coming to see their son Billy play. They state that if their son didn't get into Yale "it'll be the end of the world," leaving Sam struggling to control his temper.

Dean is leaning against the Impala snacking, when Sam walks up to ask what he found out at the morgue. Dean tosses a container holding a vampire fang and explains that Susie must have known her killer, as there were no defensive wounds. As Susie was friendly with most of her peers, this doesn't help the Winchesters to narrow down their suspects.

Later that night, another cheerleader, Tori, is walking to her car when she is attacked by something lurking in the hedges of the school's parking lot. The next day, the Winchesters are searching the area where Susie's body was discovered and remark on the lack of blood, meaning she must have been killed elsewhere before her remains were dumped there. Dean mentions that the local police are freaked by the brutality of what happened to Susie. This causes Sam to lament about how it's up to him and Dean to deal with the crazy of the supernatural while everyone else gets to live their everyday white picket fence lives in a state of blissful ignorance, where "the end of the world" is just a saying that's bandied about over mundane problems. Dean listens while drinking from his hip flask. Sam is interrupted by the vice principal, informing him of Tori's disappearance.

Meanwhile, in the suburbs of another town, Becky Rosen is sending her husband and two sons off for the day when she spots Chuck across the road. Becky tries to ignore him, but he chases after her and appeals for her help by claiming he has no one else to turn to. In Becky's house, Chuck is fiddling with her maquettes and learns that Becky has the most successful Etsy site for unofficial Supernatural merchandise in the country and possibly the world. Becky confesses that she went to counseling to get through the darker elements of her obsession with Supernatural (and Sam in particular) until she was able to start writing again. This led to making merchandise based on her stories where she chooses to focus on the brotherhood over the monster hunting. Chuck takes exception to this, causing them to debate which story lines Supernatural fans want most. Chuck explains that he has had a falling out with the Winchesters and been rejected by his sister, and has come to Becky in the hope that his number one fan would help boost his ego. Infuriated by Chuck expecting her to "fluff" him, Becky tells him how she has a family and she likes herself for the first time in a long time, so she doesn't need him anymore. Chuck confesses that he's happy for her because he kind of hates himself right now and that he feels lost. Becky asks him what makes him happy to which he responds "Writing. Creating," causing Becky to declare that then that is what he should be doing.

Back at the high school, Sam and Dean learn more about Tori's disappearance. Dean is sitting on a picnic table finishing his conversation with the school mascot when Sam joins him and fills him in on how Tori was due to take over Susie as head cheerleader after her death, so they agree their chief suspect is whoever is third in line for the position.

In the gymnasium, Veronica is sweet-talking Billy when his mother interrupts them, calling him away. Disappointed, Veronica starts practicing her eulogy to Susie when Sam and Dean enter carrying a concealed syringe filled with dead man's blood. Dean sarcastically congratulates Veronica on her milking Susie's death for attention and the Winchesters invite her to go outside with them. However, when Veronica declines, Sam spots her dental braces and they realize she can't be the vampire after all. Once outside again, Sam notices the security camera overlooking the car park.

Billy and his mom are arguing in the Whitman kitchen about her tracking him down at school. His dad enters, trailing spots of blood which are shown to be coming from a gagged and bound Tori who is being kept in their basement.

Becky rants at Chuck, telling him that the reason he feels sad and lost is because he is avoiding doing the one thing that he actually enjoys: writing. This backfires however when, emboldened by her speech, Chuck sits at her laptop and begins to write.

Back in Bailey's office, the Winchesters finally get a lead from the security cameras when a car is shown fleeing the scene shortly after Tori's abduction. The Whitmans are still arguing when Sam and Dean arrive at their door in their usual hunter's attire. Mrs. Whitman leaves the room while Billy answers the door. Sensing something's wrong, Mr. Whitman sends Billy upstairs. Hearing a noise from the basement caused by a struggling Tori, Sam heads off to investigate. As Dean confronts Mr. Whitman, Sam comforts and attempts to rescue Tori -- whose blood is being harvested -- only to be caught by Mrs. Whitman and escorted back upstairs at gunpoint. Sam places Tori on the sofa and tells Dean that she needs a doctor. Meanwhile, Mr. Whitman begs his wife to escape with their son.

Sitting at her laptop, Becky reads Chuck's story while he paces nervously nearby. Becky loves it but after being pushed for criticisms, she confesses that she feels his story is lacking jeopardy due to a weak villain. The more notes Becky gives, the more the friendly Chuck façade slips to reveal the menacing deity beneath. Commanding her to move, Chuck returns to the laptop and begins to write again.

Billy comes down from his room to see what is happening and his dad tells him that the Winchesters have come for him because he is a vampire. Sam notices the silent exchange between all three Whitmans and realizes that it's actually Billy who is the vampire, and his parents have been trying to protect him. Billy admits that he was on a date with Susie when he lost control and killed her. Billy tells his parents that they must take Tori to the hospital and say Billy kidnapped her and ran away while he goes with the Winchesters. As Dean is shown preparing to behead Billy in the woods, at the Whitmans', Tori is being carried out on a stretcher and Billy's parents are giving a statement to the police.

Chuck leans against Becky's desk, smugly pleased with himself as she sits horrified by the

ending that she has just read. She tells him he can't create such a hopeless, dark ending, as it's unfair to the fans. Becky is interrupted by her husband, Roy, coming home and she asks Chuck to leave but he refuses. As Roy enters the room, Chuck snaps his fingers, causing Roy to disappear before doing the same to her kids. Chuck watches her beg for them to be brought back. He confides to her that He is God, telling Becky He can do anything because He's a writer before snapping His fingers and sending her away as well.

Driving back in the Impala, Dean prompts Sam into talking and they agree they would have given themselves up for Jack if they could, just as Mr. Whitman intended to for Billy. Dean admits that he felt like giving up after Chuck betrayed them in the graveyard, but that Sam saved him and he believes they must keep fighting in honor of those they've lost. Sam admits that he can't move on, that sometimes the loss makes him feel like he can't even breathe, but maybe he'll feel better tomorrow, because he doesn't know what he'll do if that isn't the case.

Typing away on the laptop, Chuck is excited by whatever horrors he is constructing for the Winchesters' future.[1] 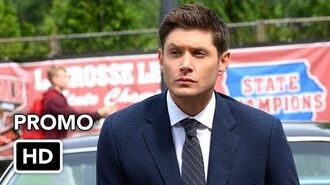