Supernatural Wiki
Register
Don't have an account?
Sign In
Advertisement
in: Episodes, Season 8, Episodes Named After a Song
English

Sam and Dean are stunned when a man who claims to be Henry Winchester (guest star Gil McKinney), their grandfather, suddenly appears in their hotel room demanding to know where he can find John Winchester. Henry has time-traveled to stop a demon named Abaddon (guest star Alaina Huffman) and was looking for John's help. Through Henry, Sam and Dean learn more about their father and the Winchester blood line.

In Normal, Illinois, in the year 1958, a sharply dressed man wakes his young son and bids him goodbye on his way to work, playing a music box to soothe the boy back to sleep. The man travels to a mysterious building bearing the same symbols as a pin on his tie, and greets a beautiful woman named Josie. Men in robes call Josie away, but while the man waits, a number of screams draw his attention. He enters their chamber to find the men slain, Josie possessed by the demon "Abaddon," and the last living man begging him to hide a mysterious box bearing the same symbol. The man flees into one of the adjacent rooms, and begins putting together a spell, diving through its portal before Abaddon catches him.

The man flies out of a closet in the present day, standing before Sam and Dean. The man asks for John Winchester, but when the brothers try to restrain him for answers, the man slips from their grasp and leaves the two handcuffed to a chair. Leaving the motel room, the man observes his futuristic surroundings for a moment before breaking into the Impala, at which point Sam and Dean get the drop on him. Interrogating the man, Dean reveals that John Winchester was their father which shocks the man, before the proceedings are broken up by the appearance of Abaddon through the closet portal.

Dean manages to stab her with Ruby's knife, curiously having little effect, but allowing the brothers enough time to escape. As the three drive off, Abaddon possesses the motel manager for knowledge of their trail. Down the road, the man catches his breath from the ordeal, revealing himself to be John Winchester's father, the boys' paternal grandfather Henry. At a diner, Henry's story is seemingly verified, Dean resents his grandfather for supposedly walking out on John as a boy, though Sam reminds him the current predicament might have caused Henry's disappearance years ago. Henry speaks of complicated spells to perform the time jump again, confused why the brothers aren't more knowledgeable about such things.

It seems Henry comes from a line of "Men of Letters", knowledge-keepers of the supernatural that John, Sam and Dean would have been trained in, had Henry not disappeared. Henry takes the boys to visit the group's headquarters, now remodeled as an Astro Comics store. Explaining the ways of "Men of Letters," Henry has Sam and Dean use an employee's computer to track down the other men from the group, all of whom were reported dead in a fire in 1958. One name however, Albertus Magnus leads the three to a nearby cemetery, where they discover that member Larry Ganem has survived to this day under an assumed name. Meanwhile, Abaddon visits the comic shop, and kills the young gothic employee for her knowledge of the groups' whereabouts.

Back at their motel, Henry whistles the music box's tune "As Time Goes By," before explaining that Abaddon ranks among the Knights of Hell, a group of special demons handpicked by Lucifer. The elder Winchester begins to realize from John's journal that he himself likely never made it back to 1958, as the boys explain how John came to believe Henry abandoned him before he got involved with the hunting lifestyle regardless. That night, Henry pores over his son's journal while Sam and Dean sleep, before departing and leaving a note that he'll "fix everything." Realizing that Henry will likely attempt to go back in time again, Dean heads off to a local hoodoo shop to intercept him, while Sam visits the elderly Larry Ganem. Larry explains that the mysterious box contains a key to a "supernatural mother lode" of scrolls and spells, which must be kept from Abaddon at all costs.

Just then, Abaddon reveals her presence in Larry's wife, killing the older man and taking Sam hostage. Meanwhile, Dean interrupts Henry's ritual, worried that further timeline interference would cause he and Sam to cease to exist. When Henry refuses to relent, wanting to spare John from his difficult life, Dean has no choice but to knock him out cold. Henry awakens on the road with Dean, en route to trade Henry himself and the mysterious box in exchange for Sam's life.

Dean explains that he'll never let Sam down the way he failed to save his father, Sam being the only real family he has left. The pair arrive at Abaddon's abandoned factory to make the trade, before the demon predictably double-crosses them. Abaddon then stabs Henry, but not before he squeezes off a round, after which the demon finds herself unable to move from her vessel. Dean reveals that he and Henry planned the switch, carving a Devil's Trap into the bullets, all in the interest of slowing the demon down.

Dean beheads Abaddon, vowing to carve her into pieces before Henry gives them a box and expresses pride in his son and grandsons, before he slowly dies. The brothers then dig a grave for their grandfather in the cemetery of his fellow deceased Men of Letters, and realize the significance of all Heaven positioning the brainy Winchesters and brawny Campbells together to produce them. Dean regrets that John never knew what really became of his father, as the boys vow to track down the mysterious store of supernatural paraphernalia. 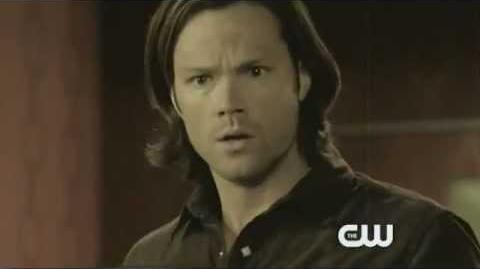