Start a Wiki
watch 01:51
The Loop (TV)
Do you like this video?
The Aquarian Star, more commonly known as a Unicursal hexagram, is a six-pointed star that represented the Men of Letters. The top and bottom rays of the star are larger than the other rays. In some cases, the star is enclosed by two circles, as opposed to depicting the star by itself. According to Henry Winchester, the star represented great magic and power and guarded the gates of Atlantis. The Men of Letters used this to identify themselves and their bases of operation. They also used it to mark several possessions, including their key, or even in tombstones. 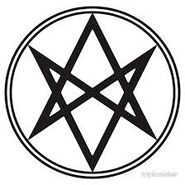 A faded Aquarian Star depicted inside a pair of circles.

A Men of Letters pin worn by members of the order 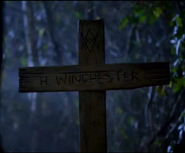 Henry's grave marker with the Aquarian Star inscribed above his name
Add a photo to this gallery
Retrieved from "https://supernatural.fandom.com/wiki/Aquarian_Star?oldid=374575"
Community content is available under CC-BY-SA unless otherwise noted.