Edit
watch 01:32
She-Hulk Trailer Dropped - The Loop
Do you like this video?
Play Sound

Anti-possession symbols are a method to ward off demonic possession. It features a pentagram, or endless knot, which is the reason why it protects those who wear this symbol. The only people known to have this symbol tattooed on their bodies are Sam and Dean Winchester and Sera Siege. Kevin Tran and his mother received these tattoos, though Mrs. Tran's was later burned off, rendering her vulnerable to Crowley. 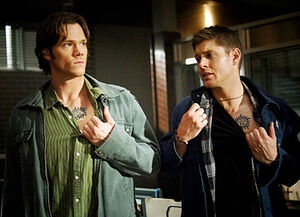 Following Sam's possession by Meg, Bobby gives both Sam and Dean a charm amulet, each of which features a symbol that will prevent demonic possession.[1] The boys reveal that they have had these symbols tattooed on the upper left part of their chests. With this, Sam and Dean can no longer be possessed by demons. They give the charm amulets Bobby gave them to people in the police station.[2]

This tattoo can be negated if it is physically destroyed, such as by being burned off.[3] Castiel later removed Sam's to allow Crowley to briefly possess him to help expel Gadreel.[4] Sam eventually got it reapplied.[5]

Later, Dean still has the tattoo, however it is now inverted most likely as consequence of him becoming a demon.[6]

The Winchesters eventually had the tattoo given to Linda and Kevin Tran (though Linda's was ultimately burned off[3]) and the Nephilim Jack.[7]

During an encounter with Nick and Abraxas, Mary Winchester revealed that she also bears the tattoo, albeit on her abdomen.[8]

Decades later, Sam gave the tattoo to his son on his right forearm.[9]

Although Dean was originally going to have a tattoo - as seen behind the scenes in Phantom Traveler - it was in Season 3 that both Sam and Dean got tattoos. Sera Gamble answered questions about the tattoos origins in an interview:

FNN: Those matching tattoos are pretty cool. How long has that been planned?

Gamble: I remember talking about it with Ben Edlund last season, while Cat was writing "Born Under a Bad Sign." We agreed that if we were Sam, the first thing we'd do is take that anti-possession amulet and head for the nearest tattoo parlor. He reminded me of it while we were working on "Jus In Bello," because breaking out the amulets was an important story point in that episode. So I stuck it in there, and it made for a nice moment. It's like, of course Sam and Dean have matching tats. How could it be any other way? By the way, I'll be convinced we're truly a cult hit when a fan gets the same tattoo."

The tattoos have subsequently appeared in other episodes, and it is one of the most used tattoo themes of the series for the fans. In The Monster at the End of This Book, the phenomenon of fans getting tattooed because of the series is referred to when Sam and Dean reveal their tattoos in order to pass as avid fans. In response, the publisher of the books by Chuck Shurley reveals she has the same tattoo - on her bottom. While not named in the episode, the publisher's name was Sera Siege, named after writers Julie Siege and Sera Gamble.

Both showing Tattoos (Close up)

Dean's Tattoo showing under his shirt

Sam's Tattoo showing when he is talking to "Jess"

Tattoo showing at the edge of Sam's shirt.

Dean's Tattoo when engaging with Lydia

Sam showing his Tattoo to Kevin

Kevin and his mom get the anti-possession tattoos (season 8) 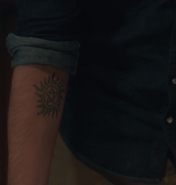 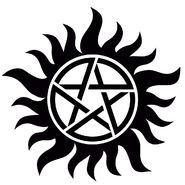