All in the Family

All in the Family

Amara (guest star Emily Swallow) shows Dean how she's torturing Lucifer. Worried for Castiel, Dean and Sam come up with a plan to rescue him from Amara's clutches.

Sam and Dean are standing in the middle of Main Street in Hope Springs, Idaho. Dean is holding the Samulet as they confront Chuck. Dean demands to know what's going on. Chuck says they need to talk. Dean refuses to go anywhere with Chuck and even questions if Chuck is actually Chuck and not a manifestation. As Dean is talking, Chuck transports them to the war room in the bunker. As Sam and Dean realize what's happened, Kevin Tran steps out from behind Chuck. He tells Sam and Dean that they looked "stressed" and that they should do whatever Chuck asks them to do. Chuck then tells Kevin that he has been in the Veil long enough and deserves an upgrade. Kevin transforms into a bright white light, ascends upwards, and disappears as the brothers are further shocked.

Sam is visibly excited to be talking to Chuck while Dean is more reticent. When Chuck calls him on it Dean becomes emotional, asking where Chuck has been and why he did nothing while all sorts of terrible things happened throughout history. Chuck explains that he was hands-on for a very long time, thinking that if he continued to offer support things would get better. But they didn't, so he stepped away to let his baby find its way. When Dean counters that things haven't gotten any better Chuck disagrees, saying that from where he sits, they have. Dean accuses him of leaving them, and now trying to justify it. Chuck tells him he knows about his hard childhood but tells Dean not to confuse Chuck with his father as Dean can only look at him.

As they continue talking, Sam and Dean question Chuck about Amara, asking if he knows where she is but he denies this as he asks if they have a plan but they don't as he leaves stating he has faith before poking fun at Dean. As he leaves, Chuck is told by Dean that Amara has Lucifer and when they mention that last time he defeated Amara he needed Lucifer's help, Chuck becomes angry. He says he does not need or trust Lucifer. Nor does he need Lucifer's help in defeating Amara, especially since he may have formed an alliance with her by now. He leaves them to find the "guest room".

Amara is torturing Lucifer. He continues to taunt her by comparing her to God, pointing out the ways she doesn't compare and reminding her that while she may beat him, she will never be him. Amara complains that God stuffed her in a hole for eons, with Lucifer's help. Frustrated by his taunting, she gestures angrily at him and he passes out. After Lucifer loses consciousness, Amara approaches his inert body. Curious, she hovers her hand over his chest.

As Dean is sitting at the table in the war room using his laptop to look for Amara, she appears to him. She tells him that she knows her brother has surfaced and to let her know if he reaches out to Dean. She also says that Lucifer is not doing well, and neither is his vessel, Castiel. She shows Dean a vision of Castiel's battered form.

The fog is rolling through Lewis, Oklahoma. People are running down the street, clutching at their throats. An older man with white hair comes out of his home to see what is happening.

In the war room, Dean tells Sam about Amara appearing to him. Chuck comes in the room and Sam tells them about the fog appearing in Lewis and that everyone in the town died, except for one man.

Metatron is sitting in a bar when he sees a news story about the fog in Lewis. The story is accompanied by a picture of Sam and Dean standing in the street in Hope Springs with Chuck. He calls Dean and tells him he must speak with them in person to give them some information they need to know.

Before meeting with Metatron, Sam and Dean go to see a man who survived the fog in Lewis. The man recounts the night and says that when he went outside he felt like his head would explode, not with pain but with knowledge. Sam and Dean surmise that being touched by Amara's power is akin to being touched by the power of God and therefore the man, Donatello Redfield, must be a prophet. While Sam confers with Donatello, Amara appears to Dean again and says that he must meet with her in person, alone. As they drive back to the bunker, Sam and Dean brief Donatello on being a prophet, the looming battle between God and Amara, and how they hope he can help them find Amara. Once at the bunker, Donatello is shocked to meet God who relieves him of his previous lack faith and welcomes him.

Sam and Dean meet Metatron at the bar as he remarks they are friends with Chuck, revealing to them that he knows the latter's true identity. He tells them that Chuck will not take Amara down, that he plans to sacrifice himself, let Amara do whatever she wants with him. Sam and Dean do not believe him so Metatron shows them the manuscript—God's autobiography. Metatron says that it's more of a suicide note.

Dean meets with Chuck in a park, watching children play. Dean confronts him about not dealing with Amara. Chuck says he will offer her a deal: put him in a cage and leave the world as it is. And if that doesn't work, humans will step up—Sam, Dean, and others who are chosen. He tells Dean that he saved him so many years ago because he is the firewall between light and darkness. Dean balks and tells Chuck that he is the one that has to take Amara out.

Metatron has been pestering Dean to let him into the bunker. They concede and Metatron tells them that his past relationship with Chuck as the Scribe of God gives him valuable insight he can use to help save Chuck. Sam and Dean tell Metatron their plan to free Lucifer from Amara and then convince Chuck to use Lucifer to fight Amara.

To create a diversion, Dean reaches out to Amara, meeting with her in a forest. She asks him to give up his humanity and join her for eternity. As they are talking Amara reaches out to touch Dean's face and realizes that she can't find his thoughts, that he has talked to God and that he is betraying her.

While Dean is with Amara, Sam, Metatron, and Donatello go to the building where Lucifer is being held. Metatron performs a spell to free him from his shackles. They tell Lucifer their plan and he agrees to work with Chuck to defeat Amara. As Lucifer is freed, Donatello feels Amara coming. Lucifer can't 'zap' them away from the tower in his weakened state so Sam grabs him and tells everyone to run. Metatron tells Sam to go, he will stay behind. He cuts his hand and draws a sigil on a piece of wood. As Amara appears he places his hand onto the sigil. Bolts of bright white light envelop Amara, but when they stop, she is still standing there. In retaliation, Amara sends out black smoke to surround Metatron. He melts into it and disappears.

As Sam is speeding away in the Impala with Lucifer and Donatello, Amara appears in the middle of the road. Sam tries to pull away but the tires just squeal and spin. Amara declares, "You really aren't worth sparing. None of you." and spreads her arms out to the sides. Suddenly the Impala is dropped into a room in the basement of the bunker. They walk upstairs and Chuck meets them, six-pack in hand, stating that "Occasionally, I do answer a prayer." Chuck and Lucifer have sullen reunion before God heals Lucifer.

Sam and Dean see Donatello off in a cab and Dean tells Sam that Amara wants him with her forever. 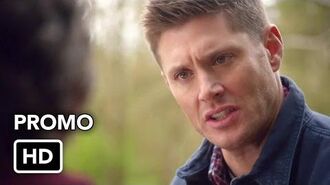