Supernatural Wiki
Register
Don't have an account?
Sign In
Advertisement
in: Episodes, Season 10, Episodes Named After a Song

Looking to get Dean out of the bunker, Sam finds a case for him and Dean to investigate- people are disappearing into thin air with only their clothes left behind. Sam and Dean suspect fairies or angels, but the truth turns out to be much more shocking- Hansel (guest star Mark Acheson), from Hansel and Gretel lore, is kidnapping people and turning them into their younger selves to placate the evil witch (guest star Lesley Nicol). Unfortunately, Dean finds this out the hard way after he becomes Hansel's next victim and reverts to his 14 year old self.

In Pendleton, Oregon, two men are arguing inside a bar. One man, JP is thrown out, and as a homeless man watches, JP walks towards his car. A mysterious man appears behind JP and there is a flash of bright light, and the homeless man finds only a pile of clothes.

In the Men of Letters bunker, a worried Dean sits in his room researching the Mark of Cain. Sam enters with the news that he caught a case. Dean wants Sam to check it out, but Sam tells Dean that he needs to get back in the game instead of locking himself away Sam knows that Dean can beat this. Bolstered by Sam's confidence, Dean agrees.

In Oregon, Sam and Dean question the homeless man who says that he smelled flowery flowers but no sulfur, and who insists it was the work of aliens. An annoyed Sam and Dean walk away, and then they split up: Sam to check out JP's place and Dean to investigate the bar.

Dean enters the bar and orders a drink. After questioning the bartender, Dean starts talking with Tina, a woman at the bar, about JP. They begin drinking together and reminiscing about crappy childhoods. The man that attacked JP sits listening in the background. Sam calls Dean, as Tina leaves the bar, and Dean watches as the mysterious man follows Tina out. Dean explains to Sam that he may have something so he hangs up and goes outside. Dean hears a scream and when he goes to investigate he finds a pile of clothing. The mysterious man approaches Dean, and with a flash of bright white light, Dean wakes up in a basement and discovers that he is a teenager.

Teen Dean looks like his 14-year-old self, but he has all his adult memories. A 14-year-old Tina is in the room next door, while Dean reassures Tina, they discover JP who is then taken away by the mysterious man. After snacking on cake, Dean finds a way out of the basement, and Teen Tina tells him to go for help while she remains behind as a distraction.

Meanwhile, Sam goes to the bar looking for Dean. Sam questions the bartender who has Dean's jacket and phone. The bartender says he found it by the dumpster, Sam investigates further and finds Dean's boot and the smell of flowers. Back at the motel, Sam is researching flowers in an attempt to find Dean, when Dean knocks on the door. He greets a confused Sam with a "Hi'YaSammy." Dean explains what happened, and the boys head out to save Tina.

In the car, Sam is asks how it feels to be 14. Dean tells him that it feels weird, that he liked a Taylor Swift song, he's having random erections and that the Mark of Cain is gone. Sam says he found yarrow, flowers used in rituals, so the boys assume they are hunting a witch. Sam wants to get Dean changed back, but Dean isn't so sure; believing that while not ideal, they've found a cure for the Mark of Cain.

Sam and Dean arrive at the house where Tina is being kept, Dean sneaks in the same way he got out, but Sam is too big to enter that way. Dean is attacked by the mysterious man, but Sam comes up behind him and saves Dean. The mysterious man explains that he is Hansel of Hansel and Gretel, and that the evil witch, Katja made him and his sister do terrible things. When Sam and Dean reveal to him they are hunters, he agrees to help the kill her. However, if Hansel wants to help, Sam first demands to know how to turn Dean back to his proper age. Hansel explains that the hex bag around his neck is the key.

Upstairs, Katja is cooking soup, as Tina is tied to a chair. Hansel and the boys enter the kitchen, and she orders Hansel to take care of the Sam and Dean who think Hansel is on their side. Katja explains that she never made Hansel do anything, and then Hansel knocks Sam down and takes his gun.

Katja explains to Sam and Dean that she loves to eat delicious children, and Sam questions why she changes adults to children instead of taking children. She explains that stealing children has become more difficult since the olden days, and it is much easier to just transform an adult no one will miss than attempt to kidnap a child. She explains that the Grand Coven sent her here to take care of Rowena. While Dean is distracting Katja with conversation, Sam pulls a switchblade from his back pocket and attacks Hansel, Sam then goes after Katja but she easily throws him against the wall. Meanwhile, Dean is being beaten by Hansel. Katja orders Hansel to turn Sam, but when Hansel reaches for the hex bag around his neck, it is gone. Dean has taken it, and he uses it to turn back into an adult. He picks up the witch's knife and kills Hansel, Dean then shoves the hex bag in Katja's mouth, keeping her from reciting any spells and pushes her into the fiery oven.

Afterwards, Sam and Dean explain to Tina that the hex bag was destroyed, but there is a chance they can figure out how to reverse the spell, but Tina sees her renewed youth as a second chance at life, and is willing to make the best of it. The next day, Sam and Dean give Tina a lift to the bus station and all the cash they have, and they depart. Sam and Dean now know that the Grand Coven may become an issue, however, Sam is more concerned about the Mark of Cain. Dean felt he had to change back to save Sam, which Sam understands: Dean saved them –- Dean pulled a "Dean Winchester." After thanking Dean, Sam admits that he wants the Mark gone, but Sam also wanted Dean back. Sam counts it as a win because he has Dean back and Dean didn't "Hulk out." Again, Sam reassures Dean that they will figure it out. Dean agrees, and they drive off while listening to a Taylor Swift song, much to Sam's befuddlement. 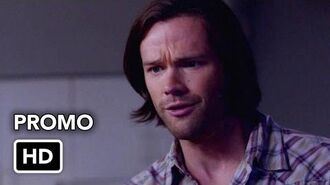